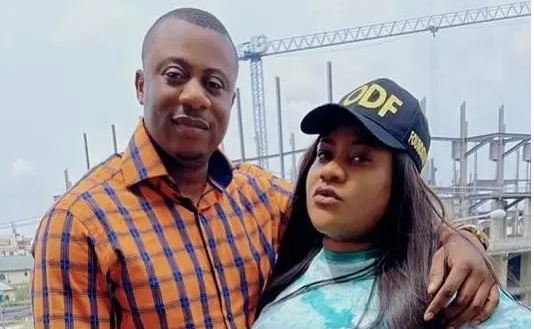 During an interview with TVC “Your View” aired Thursday, Blessing spoke about her immediate past relationship and how it eventually ended.

When asked if she still loved Falegan, the actress said she was “100 percent” about him. According to her, she entered into a relationship with the politician only to bully a previous lover.

She described how she got into a relationship with Falegan, saying, “The point is, he was the one who loved me more. It was the time when I tried to rise to the love he has for me, which he screwed up.

“I recently broke up with my ex who lived in America, and in the thick of it, while we were still trying to work things out, he started posting a girl covering her face.

“Then I realized there’s a guy out there asking me out, okay, great man. In all the ramifications of people I like so far, he’s not 1-10. So that was me just trying to use him to get back at my ex – then I ended up in a relationship.

In response to the interview, Falegan took to his Instagram page where he made fun of the actress for talking about him during the interview.

“This girl will never stop calling my name kilodeee? Once I have a reason to go I will never find an excuse to come back. Are you getting no content again?

“Linking my name to yours is dysfunctional, just stop calling my name abeg, someone should give her the substance, she sounds really empty right now,” he wrote.

Falegan and Nkechi became embroiled in a public war of words earlier in the year when they announced the breakup of their marriage.

Despite sharing photos from her alleged 2021 wedding, Blessing stated after their breakup that she was never legally married to Falegan.