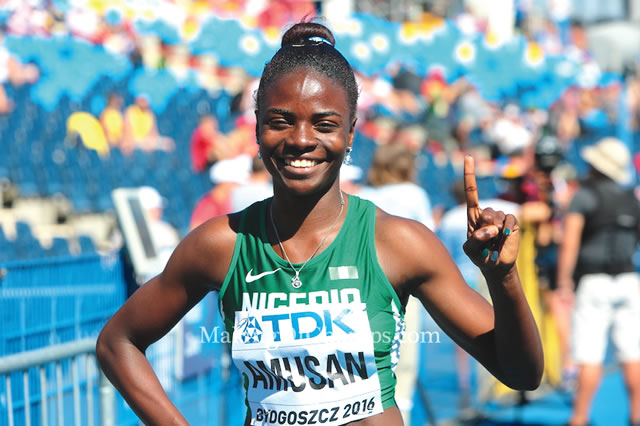 Hurdler Tobi Amusan is enjoying her impressive run in 2022, having set new World and Commonwealth Games records at the World Championships in Athletics in Oregon and the CWG in Birmingham, before capping off a stellar season with a Diamond League win in Zurich, with which she also set a new measurement record.

Amusan clocked 12.12 seconds for her world record in Oregon in July, before following that with a CWG record of 12.30 seconds in Birmingham, but she now hopes to run under 12 in the 100m hurdles after her stunning performance in 2022.

Talking about her record year run, the 25-year-old hurdler, in a conversation with The PUNCH Online said: “I feel lucky, thank God for the opportunity to showcase my talent and put myself, my family and Nigeria on the world map. In all sincerity it’s been the same all year; I am disciplined, committed and focused on my goals. But things work like magic when God says it’s your time.

“But just about, I’ve been doing the same thing for a few years now, but the hard work just paid off. It’s not by my power, but God did it.”

Don’t rest on her laurels, the Ijebu-Ode-born athletic queen wants to break more records in the coming months.

“God has been great, it was a difficult start to the season,” she said after winning her race in Zurich. “The World Championships and Commonwealth Games took their toll on my body, but it was great to show up when I needed to. Breaking the world record has made it clear to me that there is so much to do when it comes to hurdles. Next year I will always put God first, I will practice more and do more work, yes a sub-12 is possible.”

She added that despite the challenges, her mental strength and positive attitude were the driving force behind her successful season.

“I come from a very spiritual family, even when the going gets tough, we still say ‘thank you Jesus.’ Most of the time it may not be what we want to hear, but we say thank you Jesus anyway. So I got used to saying what I want, even when it might not look like it. But I know before, it will happen.

“That was like a motivation that drove me into the sport. I wake up, set my goals and work towards them, even when I don’t feel like it. When I went to the championships, I had to remind myself that I am the best and nothing will stand in the way of my greatness. ”