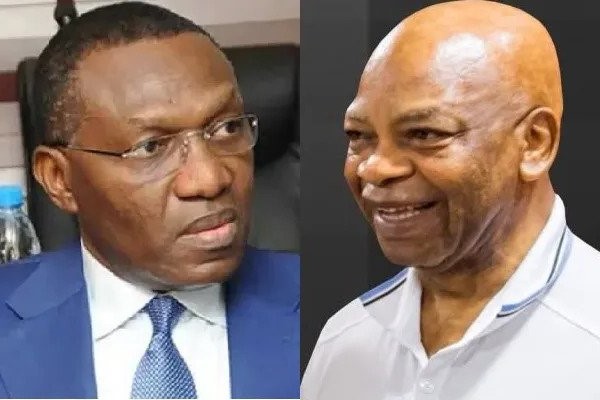 Senator Andy Uba has responded to the viral news that he has reportedly taken a N50 million loan from Prince Arthur Eze.

It was also alleged that there was an execution of a court ruling reporting that vehicles had been seized from him for the loan of N50 million.

But responding to the development in a press statement made available to journalists in Awka on Friday, Uba denied any loan from Arthur Eze.

He said he had never borrowed N50m from Arthur Eze and that they both only attended a church service at St. James Anglican Church Uga, Aguata Local Government Area, Anambra State, during his senatorial campaign in the run-up to the 2015 general election.

Uba claimed the said N50m was a donation from Arthur Eze for his senatorial campaign.

He said the response became “fundamentally” necessary to state unequivocally in clear and categorical terms the true factual position of things.

The statement read: “My attention has been drawn to the defamatory, malicious and character-damaging publications in the print and electronic medium, as well as on social media platforms about malicious lies and accusations arising out of the execution of the Supreme Court judgment of Anambra Mentioned in lawsuit No: AG/94/2016, through the Bailiffs of the Supreme Court of the Federal Capital Territory of Abuja on 23/8/2022.

“It is fundamental to state unambiguously in clear and categorical terms the true factual position, thus:

“To be clear, I never borrowed N50m from Prince Arthur Eze, we both only attended a church service at St James Anglican Church Uga, Aguata LGA, Anambra State during my senatorial campaign leading up to the 2015 general election.

“During the said church service, Prince Arthur donated Eze N50m to support my senatorial political campaign at the altar and the entire congregation was flooded with joy and happiness, extending the officiating priest a warm handshake of gratitude and appreciation for his kind gesture and I have also sent a thank you letter dated 22/2/2015 to Prince Arthur Eze.

“I was stunned, surprised and stunned to learn that my soul mate and brother, through his company Oranto Petroleum Limited, through which the said check from N50m had been drawn, filed a lawsuit a year later in the Supreme Court of Anambra State, Aguata Division sitting at Ekwulobia in suit no: AG/94/2016, through what they called (undefended list) Proceedings or liquidated monetary claim or summary proceedings.

“The pertinent question on many people’s lips is: do people go up on the rooftops to praise or thank others for lending? How many people have you seen who got a loan from a bank or private individual and went to church to praise the creditor for granting such a loan that would only be repaid?

“I quickly engaged my attorneys who filed my merit defense defense denying the allegations that the said money was a loan, but a freewill donation, unfortunately, despite our clear defense and the issues raised, the court refused and failed to give us fair compensation. hearing by having the case heard at a full trial where witnesses will be called and evidence will be directed, but has dealt with the case in the (undefended list) proceeding or the summary proceedings, that is, dealing with the case on the basis of only the allegations and documents filed by the plaintiff (Oranto Petroleum Limited) without any contradiction. The court proceeded to grant all injunctions and ruled in favor of the plaintiff on 6/3/2017.

“In exercise of my constitutional right, I appealed to the Enugu Division of the Court of Appeals, culminating in Senator Andy Andy –Vs-Oranto Petroleum Limited, Appeal No: CA/E/197/2017, citing the said challenge decision of the Supreme Court of Anambra Declare inter alia on the grounds that the said money was a freewill donation and not a loan, as well as a dispute that the handling of the case on the undefended list without my input amounts to a violation of my fundamental right to a fair trial, guaranteed under Section 36 of the 1999 Nigerian Constitution (as amended), which resulted in a miscarriage of justice.

“As a result of the above, the parties submitted and exchanged their respective pleadings and the appeal was set for the hearing on February 26, 2019. However, there was an intervention by some of Anambra’s stakeholders and I was approached by Prince Austin Ndigwe (Uzu-Awka) , who is a mutual friend of mine and Prince Arthur Eze for an out-of-court settlement of the matter.

“Thereupon, after a meeting between me and Prince Arthur Eze at his Enugu residence, which was being defended by Prince Austin Ndigwe (Uzu-Awka), I was advised by way of advice to withdraw the appeal on the grounds that Prince Arthur Eze then satisfied that the money was a donation to my senatorial political campaign and not a loan as he was previously supposed to believe.

“Prince Arthur Eze persuaded me through the said Prince Austin Ndigwe (Uzu-Awka) to cease the appeal and to show good faith and fraternity, I quickly ordered my lawyer to withdraw the appeal even though we should settlement terms as a condition because the appeal was in the concluding stage. Consequently, the appeal was dismissed by the Court of Appeal on February 29, 2019, based on the notice of withdrawal filed by my attorney.

“I was profoundly surprised and shocked to the bone to learn that my brother and mutual friend Prince Arthur Eze, despite his assurances at the meeting, had withdrawn his promises about the friendly and fraternal agreement we had and surprisingly surfaced in the Supreme Court of the Federal Capital Territory Abuja, immediately registered and executed the said judgment of the Supreme Court of Anambra State, Aguata Division, sitting in Ekwulobia. The subject of my appeal to the Enugu Court of Appeal, with the sole intention of embarrassing, defaming and diminishing my reputation among the right-thinking members of the public who use numerous hired social media platforms.

“For clarity, I have attached a video clip of Prince Arthur Eze’s donation of N50m to my political campaign for election to the Senate of the Federal Republic of Nigeria to represent the Anambra South Senatorial District in the Senate of the National Assembly. at St. James Anglican Church Uga, Aguata LGA, Anambra State.

“This is contrary to the information disseminated in various print and electronic media, as well as on social media platforms that the above amount was an interest-free friendly loan, which is a calculated attempt to defame and slander my noble character and hard-earned reputation. .

“It is shocking and mind-boggling how a man will stand on the sacred altar of God and donate to the political endeavour and campaign of his brother, whose priest on duty extended a warm handshake of gratitude and appreciation for his kind gesture and later turned around to deny the purpose of the donation.

“I deeply respect the rule of law and the sanctity of our justice system with an unblemished political career as a dedicated public figure, former Governor of Anambra State, former Senator of the Federal Republic of Nigeria, and former Special Assistant for Special Tasks and Home Affairs. Affairs to President Olusegun Obasanjo, as well as a loving father, devoted Christian, and law-abiding citizen of this great nation, firmly believe that justice will eventually be served.

“I therefore call on the general public, men and women of goodwill, as well as political friends and supporters, business associates and relatives, with an abiding passion for justice, fair play and fairness, to remain calm.”