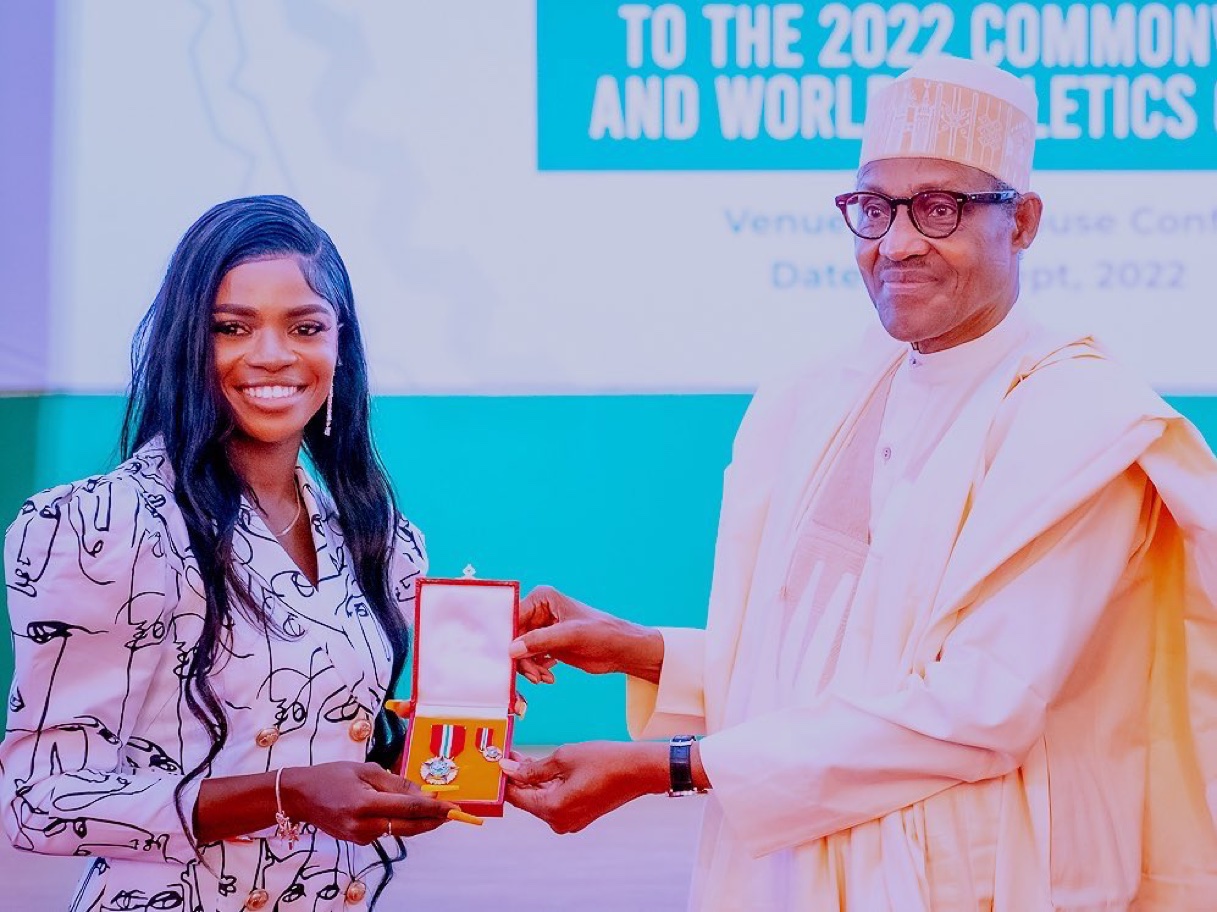 The President, Major General Muhammadu Buhari (Retd.), on Thursday approved the national awards of Officer of the Order of the Niger and cash prizes of N200m for Team Nigeria’s contingents for the 2022 Commonwealth Games and the World Championships in Athletics.

At an awards ceremony at the State House, Abuja, the president congratulated the athletes on their “outstanding achievements” and said their hour of sporting glory shone the “radar of the world on Nigeria”, adding that their exploits radiated the positive image of the country.

This is, according to a statement signed by the President’s Special Adviser on Media and Publicity, Femi Adesina, entitled “President Buhari Rewards Commonwealth Games, World Athletics Championships Athletes with National Awards, N200 Million.”

At a presidential reception honoring the athletes, the president said his administration is committed to rewarding excellence.

Buhari described the athletes as champions, worthy ambassadors, national heroes and heroines and said the awards “will push them to greater heights”.

He said: ‘I have seen with millions of Nigerians those exciting moments when you made us and our homes smile by breaking world, national and competition records and achieving personal bests in your career.

“I have closely followed your performance at the World Championships in Oregon, USA, and indeed your remarkable performance at the recently concluded Commonwealth Games in Birmingham, UK. And I am very happy that you have shown great sporting talents on both a personal and group level and delivered great podium performances for your country. ”

The president noted that 12 times the world stood still when the flag of Nigeria was raised and the national anthem was recited, 35 times we made it to the podium.

“All of you Team Nigeria made that possible. You brought glory and honor to our country. And today, on behalf of the nation, I say THANK YOU!”

The president reiterated the regime’s commitment to providing a favorable environment for young people to ascend to the pinnacle of their chosen careers, and welcomed the impact the Federal Ministry of Youth’s Adopt-An-Athlete initiative and Sport had on the performance of athletes.

He urged more individuals and business organizations to support government investment in sport, which has been reclassified from recreational activity to business, in line with modern practices worldwide.

Buhari also acknowledged the progress made in the sports sector under the Minister for Youth and Sports Development, Sunday Dare, and his team, and praised the numerous and continued successes achieved in recent years.

For his part, Dare described 2022 as an outstanding year in the history of Nigerian sport.

Highlighting the most notable achievements, Dare said in athletics, in the span of four months, Amusan won Nigeria’s first-ever gold medal at the World Championships in Athletics in Eugene, Oregon, US with a world record performance in an event heavily dominated by Americans and Europeans.

He said Amusan successfully defended her Commonwealth Games title, which she won in 2018 in Gold Coast, with a Games record in 2022 in Birmingham; and Diamond League title in Zurich, Switzerland on September 8.

The minister added that this remarkable feat had never been achieved by a Nigerian in the history of the country’s sport.

Dare further revealed that Brume, another pioneer in Nigerian sport, won a silver medal in the women’s long jump at the 2022 World Championships in Athletics and a gold medal at the 2022 Commonwealth Games in Birmingham with a record performance.

The minister described Nigeria as the best Para Powerlifting nation in the world and praised Oluwafemiayo for sticking to the tradition of winning gold in the women’s heavyweight class, setting a new world record in that class at the Tokyo 2020 Paralympic Games and the 2022 Commonwealth Games.

“By confirming that the performance was no fluke, she won a gold medal in the women’s 68kg category at the just ended 2022 Commonwealth Games,” he said.

”Mr. President, by the sporting achievements and excellence of the young athletes in front of you in this hall and several others unable to make it to this reception, Nigeria has made it known that it will not yield.

“That it will appear and compete for every available laurel, not only in sports, but also in youth development, economic progress, social empowerment, political development and much more,” he said.

He thanked the president, saying: “This government’s investment in youth development and sport will pay dividends for years after you complete your term as President of the Federal Republic of Nigeria.”