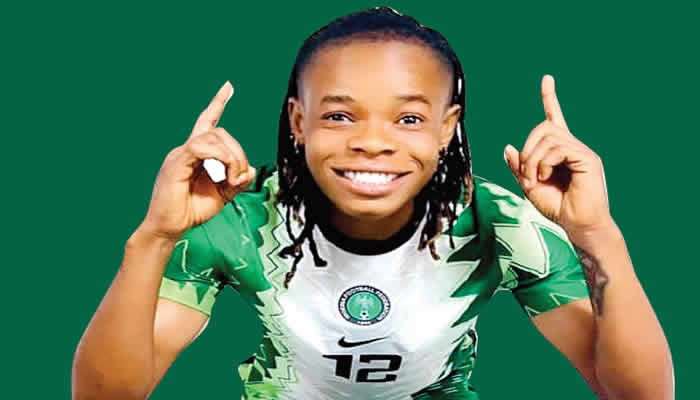 Super Falcons and ALG defender Glory Ogbonna tells TANA AIYEJINA about her Champions League dream, the WAFCON in 2022, her early beginnings and more, in this interview

Congratulations on the way to the Turkish champion ALG Spor Kulubu. How are you looking forward to the new challenge after joining Spanish side Santa Teresa?

I feel great to be in the Turkish league and also to be with the champions of the Turkish women’s football league, yes.

How would you describe playing in Spain and Turkey? Is there a difference in both countries?

Well, there’s really no difference when we talk about the Spanish league and the Turkish league or even the Swedish league, where I played before. Football is the same worldwide. The bottom line is only for you to compete, play and win, score goals and defend goals. Yet there are still differences, such as coaching. Every coach has his pattern, so the pattern of the coach I played under in Sweden is not the same as that of my coach in Spain, nor in Turkey. Every coach has his game pattern.

How welcoming were your new teammates in ALG?

My teammates welcomed me so well, they were so happy to see me. They quickly made me feel at home. The players are so great; they are so accommodating so they made me feel relaxed.

You will be playing in the UEFA Women’s Champions League with ALG this season. How do you look at your first appearance in the competition?

At the last WAFCON, the goal of the Super Falcons was to claim a 10th title, which didn’t happen. How did you girls feel after bumping into host Morocco in the semifinals?

Yes, what we expected was not what we got. We wanted the 10th trophy, we wanted to keep our trophy, but that’s football, some days are like that. Some days you win, other days you lose. So we have learned from our mistakes. We wanted to keep it, but we couldn’t, but that doesn’t mean we’re just going to relax. We go back to the drawing board and correct our mistakes so we can have a better side next time.

Falcons played with nine players against the hosts. How were you girls able to extend the game to penalties after 120 minutes?

That was a great display from us, because it’s not easy with nine players against eleven, and still hold out until the penalties. That was a great performance from us. It was a collective effort, we fought for each other. We showed the spirit of ‘Naija’ in us. We tried to make sure we covered each other’s backs and made sure the two man shortage didn’t hit us. Football is all about your mindset. And we showed that mentality, that never-say-die spirit. We fought to the end but didn’t get any further after we lost on penalties.

Were you disappointed that the Falcons couldn’t take the bronze medal after a shocking loss to Zambia in the third-place match?

We wanted to take the bronze medal against Zambia, but as I always say, football is unpredictable. What you sometimes expect is not what you see. We did everything we could to make sure we got the bronze, but unfortunately we didn’t succeed. There’s nothing we can do about that, it’s all gone now. So, like I said, it’s just up to us to keep working hard and make sure we come out with a better side, especially now that we’re ready for the World Cup. We just have to keep working hard, correcting our mistakes, so that we can be the best at the World Cup.

What is your opinion on women’s football in Africa?

Women’s football in Africa is developing rapidly. Gone are the days when you would see one team beat another 10-0, 200-0.15-0. It’s not like that anymore; every country has developed its women’s football.

Do you think female soccer players are treated the same as their male counterparts in terms of wellness and financial packages?

How did you start as a footballer?

I started at a young age. Based on the story my father told me, I enjoyed playing soccer when I was a kid. I loved to play, so I continued to do that until I was an adult. When I finished high school, I went to an academy in Aba. From there I went to a club in the Nigerian Premier League Ibo Angels. And from there I moved on to Edo Queens, although I couldn’t finish the season with the team, before signing with Sweden’s Umea IK. So that’s how it all started for me. I just love playing football.

Nigerian parents are often against their girl playing sports. Did your parents object to you playing football?

If you’re talking about my parents who supported me, of course I had their full support because my father is an ex-football player. I’ve had his full support of time. He was my backbone, supporting me inside and out, lecturing me on football players and telling me how to equip myself to improve my game. But sometimes, when I get knocked on the door, my mom says, “She needs to stop playing.” But my father, who is a footballer, knows what it is. He knows a player can get injured, a player can be knocked down, but then he keeps on encouraging and pushing me. He’s my backbone, I tell you. He is my motivator.

How did you feel about your Falcons debut?

It was a great feeling for me because every player wants to represent their country, so I was very happy when I made my first appearance with the Falcons. It all started when I got my first call-up to the U-20 team. When I switched to the senior team, I felt like I had the whole world in my hands. The feeling was great, it was so great. I was so happy to play for the Super Falcons. It’s not easy, believe me, every player wants to be there. And I’ll tell you it’s just grace because there are players who are 100 percent good to be there, but the grace isn’t there. For me I’ll say it’s just grace.