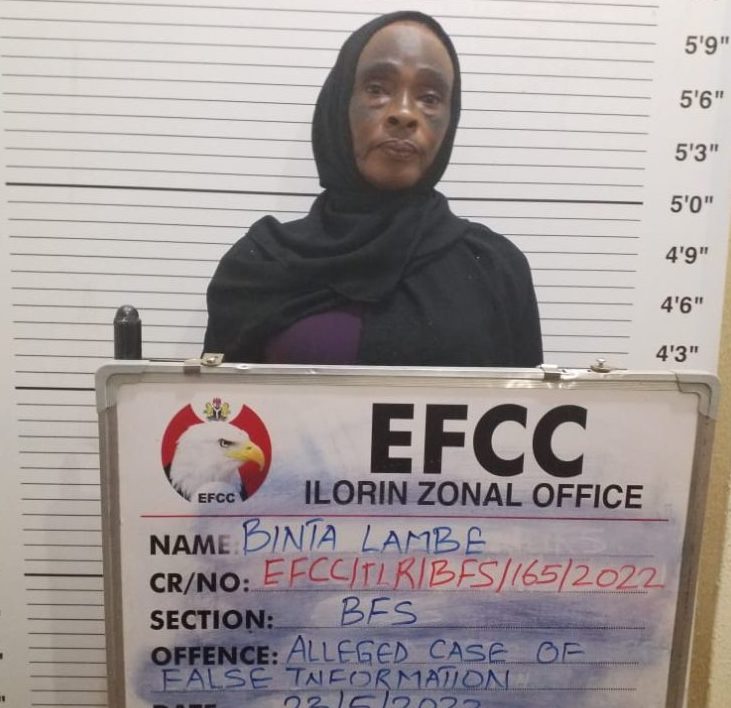 The Commission on Economic and Financial Crimes, Ilorin Zonal Command, has brought a 43-year-old Kwara official, Lambe Binta, before the Federal Supreme Court in Ilorin for false information.

However, Judge Muhammed Sani granted the defendant a bail of N500,000 with a bail of the same amount.

Sani said the guarantor must be a government official and file a photocopy of his/her ID card with the court.

The judge adjourned the case until November 3 for the start of the trial.

Binta was arraigned on September 12 on charges bordering on internet fraud and possession of fraudulent funds.

She is said to have received N25,000 from one Faloye Victor, who was arrested by the EFCC for offenses bordering on internet fraud and possession of fraudulent funds.

The charges against her read:

“That you, Lambe Binta, sometime on May 12, 2022, in Ilorin, Kwara State, within the Judicial Branch of the Federal Supreme Court, gave false information to Olanrewaju Lamidi; an officer of the Economic and Financial Crimes Commission, EFCC, in the performance of his duties, declare on EFCC Criminal Form 25 (Recognition) that you have not received or paid anything for Faloye Oluwadamilola Victor’s bail either for yourself, or on behalf of another person who to your knowledge is untrue in a material particular and has thereby committed an offense in breach of section 39(2)(a) of the Economic and Financial Crimes Commission (Establishment) Act 2004 and punishable under Section 39(2)(b) of the same Act.”

The accused pleaded not guilty to the charge.

After her plea, EFCC counsel Andrew Akoja asked the court to set a date for the trial so that the prosecutor can prove his case.

Counsel for the defendant, Abiola Usman, had verbally requested the court to release his client on bail pending trial.