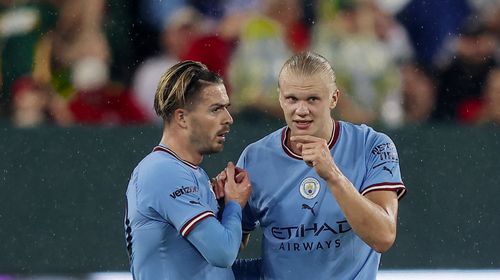 Pep Guardiola’s side took just 56 seconds to take the lead at Molineux as Grealish finally had a memorable day after a difficult time since joining City from Aston Villa last year.

Haaland doubled City’s advantage with his 14th goal in 10 games in all competitions following a £51m ($58m) transfer from Borussia Dortmund that already looks like a bargain.

Wolves lost any chance of a backlash when Nathan Collins was sent off in the first half for a nasty stomach-high foul on Grealish.

Phil Foden finished City’s walk in the Midlands sunshine as the Premier League champions moved to the top of the table.

Unbeaten City are two points ahead of second-placed Arsenal, who would recapture pole if they win at Brentford on Sunday.

Guardiola said this week that the “exceptional” Haaland was the “perfect” person to manage, as his personality kept him always hungry to improve.

Even Guardiola may run out of superlatives to describe the 22-year-old Norwegian as he continues this astonishing streak.

Haaland was named Premier League Player of the Month for August after his blistering start to the season and he is already arguing for September’s award.

He has scored in seven consecutive appearances for City and is the first player to score in their first four Premier League away games.

City are showing their appetite to win the title for the fifth time in six seasons and are unbeaten in a club record 22 away games since losing to Tottenham in their opening game last season.

There was a minute’s silence and a rendition of the national anthem following the death of Queen Elizabeth II, with Steve Bull and Mike Summerbee, legends of Wolves and City respectively, laying wreaths on the field before kick-off.

After that poignant tribute, City silenced Molineux again in the first minute with a beautifully crafted opener.

See also  PDP may set up campaign committee next week

Foden’s daring heel sent Kevin De Bruyne away down the right wing and the Belgian’s low cross was perfectly placed for Grealish, who timed his run to poke home from close range.

It was a much-needed contribution from Grealish, who just made his second league start this season after struggling to reach his peak form since his UK-record £100million transfer.

Guardiola may also feel justified after defending the England forward following his anonymous appearance against Dortmund on Wednesday, blaming an ankle injury for his woes and telling him to ignore the doubters.

Haaland doubled City’s lead in the 16th minute with his first goal from outside the area for his new club.

This was a more prosaic attack, but it was no less effective.

With Wolves defender Max Kilman fatally pulling back outside his own penalty area, Haaland was allowed to continue unimpeded before driving a flawless finish into the bottom corner.

It was Haaland’s 100th goal in his last 99 appearances in all competitions since leaving RB Salzburg for Dortmund in 2020.

Collins’ reckless foul on Grealish, the Wolves defender who leapt into the air to kick him in the midriff, drew an inevitable red card that effectively ended the game in the 33rd minute.

When Wolves fans jeered at Grealish as he squirmed on the grass, he lifted his shirt to reveal the red stain left by Collins’ boot.

Foden added City’s third goal in the 69th minute and arrived in the six-yard box to tap in De Bruyne’s cross after Haaland’s tap came to the Belgian’s mind.