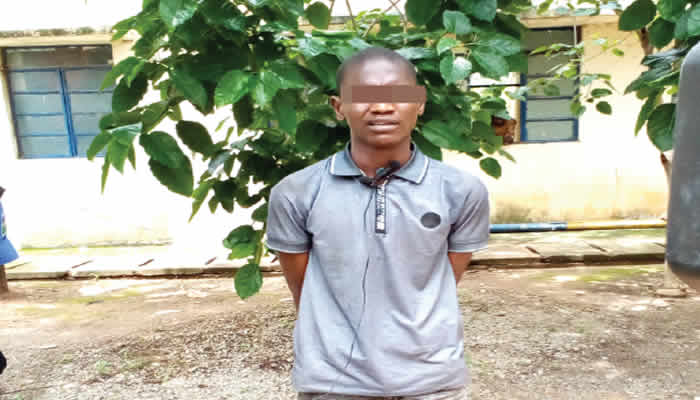 A 200-level Education Management student, Federal University, Dustin-ma, Najib Shehu, has been paraded by the Katsina State Police Command over the death of his 60-year-old stepmother, Asiya Mohammed.

PUNCH Metro understood that Najib was home with his father and Asiya when an argument broke out between the student and his stepmother.

During the argument, Najib went into the kitchen, picked up a pestle, allegedly smashed his stepmother’s head with it and hit his father’s leg as well.

While Najib’s father was due to recover in a hospital, his stepmother, who was also rushed to a nearby hospital, was pronounced dead by a doctor.

Najib told how the incident happened at police headquarters and said he had a misunderstanding with his stepmother, adding that his stepmother was the one who tried to attack him with the pestle.

He said, “My name is Najib Shehu. I am 25 years old and I study at 200 level Education Management, Federal University, Dutsin-ma. I have had problems with my stepmother, but on that Thursday I had just prayed and returned to our house.

“My father was in the sitting room when my stepmother came in with a pestle and started threatening me with it. She raised the pestle to hit my head, but I defended it. Then she wanted to hit my leg, but I jumped up, dodged it and it hit my father’s leg when he intervened.

“Again, my stepmother raised the pestle and wanted to hit my head with it, but I pushed her, and in the process the pestle hit her head and caused her to fall down and die.

“My mother was my father’s first wife and they are divorced. But I stayed with my father and stepmother in the Ambassador Quarters in Katsina. I regret my action; I didn’t want to commit the crime.”

“You know it’s a murder case and we need to investigate it thoroughly. We will take him to court immediately upon completion of our investigation,” Isah said.

However, in a statement from command about the incident, Isah had said that Najib, 25, had a misunderstanding with Asiya at around 4 p.m. on August 18, 2022 at their residence in the Ambassador Quarters, Katsina.

“He went to the kitchen, took a pestle, hit her on the head several times and she suffered a head injury and was pronounced dead by a doctor.

“On a whim, the suspect also hit his father’s leg severally with the said pestle and fractured several parts of his leg. The suspect has been arrested and confessed to committing the offence. The said pestle has been recovered as an exhibition.”

At the time this report was submitted, there had been no official response from Najib’s institution about the incident.