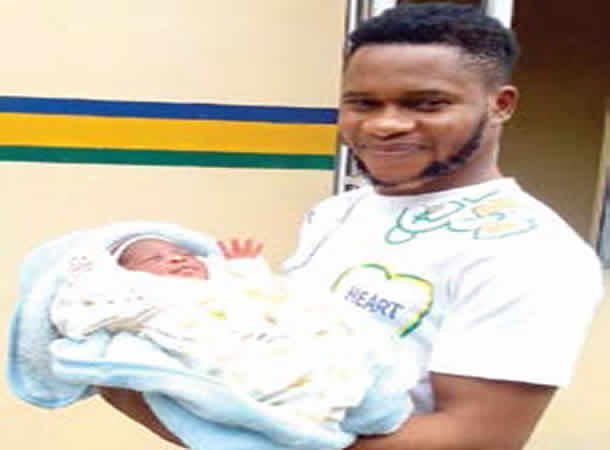 A cleric from Port Harcourt, Cyril Antai, relates: OPEYEMI ADEFEMIA what he did when an unknown woman left a one-day child on his church grounds?

Tell us a little more about yourself.

My name is Cyril Antai. I am the founder of The Twelve Apostles Outreach. I am a preacher; I am an entertainer and also a model. I live in Port Harcourt.

You allegedly picked up an abandoned child. How did you find the child?

I went to my mechanic because my car broke down; I wanted to know how far the mechanic had gone with the car repairs. On the way home, my secretary called me and told me to come to church immediately, that something was going on at church. I didn’t wait for her to explain on the phone, I just rushed to church. When I got there, I saw her holding a baby. So I asked why and she said someone got in a keke (tricycle) and dropped the baby in front of the church building. After dropping the baby, she sounded the alarm and ran back into the keke. Before my secretary and the crowd could run downstairs, the keke drove away. When they chose the child, there was a written note to the child.

The note read: Please take care of this child, call her God’s gift.

When you saw that, what did you do?

When I saw the attached note, I concluded that dropping the baby indicated that the mother didn’t actually want the child. This is an abandoned child.

Did you make any effort to find the mother?

What steps did you take then?

The first thing I did was take the baby to the police station to file a report.

What did the police say?

What is the sex of the child and how old?

It’s a female child. The baby was one day old. The baby was still very fresh because there was still blood on his body. Even the clothes she wrapped her in had a bloodstain. I took it to the clinic with my secretary, who is a mother of five. I had them check everything and we were told that everything was normal with the child. The child is doing very well.

Are you married and do you have children?

I am not married and have no children. But then I can’t say that I don’t have children, because I have some children that I take care of, but they are not my biological children. This will be my first child. I believe God for good health and long life for the child. As long as I live, the child will never suffer.

Were you not afraid that people or the police would accuse you of kidnapping someone else’s child?

There was no fear in me at all. I was confident because I told the story exactly as it happened. I don’t have a cockroach in my closet. The police there know me very well. They just greeted me and said, “Pastor, is this you?”

Raising a child is not cheap, given the economic situation of the country. Have you taken that into account?

By the special grace of God, He has sustained me. I have taken care of so many children. I don’t see this as a problem at all. I don’t need millions to take care of the child. I cannot say that I am rich or rich, but by the grace of God I feel at ease.

Newborns need so much attention and care during that time, can you do it alone or do you have people supporting you because you are not married?

I am going to contract my secretary to be the babysitter for the child. I will increase her monthly salary and I will ask her to quit the official job for now and focus on taking care of the baby. That’s what I will do.

Do you think the child might belong to any of you?r church members?

Not at all. No one is pregnant and disappeared like that.

Is this the first time this has happened in your church or have there been similar cases?

No, this is actually the first time this has happened. I’ve heard of things like this, but I’d never experienced it until now.

What do you do when the child’s mother shows up?

Any woman who shows up tomorrow to claim the child is hers will have to take a DNA test to confirm that the child is really theirs. If they don’t agree, they won’t get access to the child, not to mention her custody.

Do you intend to give the child the name on the note?

Why do you think the mother chose your church to dump the baby instead of the usual strange places where people find abandoned babies?

In the kind of environment I am in, almost everyone knows me there. I play and have a lot with children. I have many children who have scholarships. I like to give children as gifts and to play with them a lot. So the person who dropped the baby must be someone who knows me very well. There are many churches there, but she chose to drop it for my church.

How many adopted children do you have?

They are many. Most of them have families where they stay, but I still take care of them. Some of them are gone, some are still alive.

What advice do you have for young girls who have children and cannot take care of them?