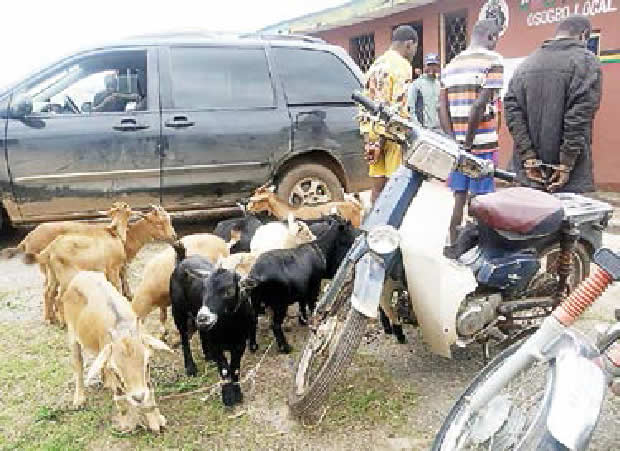 A craftsman and part-time bus conductor from Lagos, Wale Segun, who was arrested by Amotekun for stealing goats in Osun State and brought them to Lagos to sell, says BOLA BAMIGBOLAabout the criminal escapade

What is your name and what do you do for a living?

My name is Wale Samuel. I am a Lagos based borehole driller in Ketu, Lagos State.

What brought you to Osun state and what led to your arrest by Amotekun?

I came to Osun State with my friend, Segun, who is a commercial bus driver. Segun’s sister bought the bus for him to use for transportation. I usually follow the bus when Segun takes passengers from Lagos to Osun. I was arrested by Amotekun for stealing goats.

How and when did you steal the goats?

When we take passengers from Lagos to Osun state, we steal goats as we return to Lagos. I usually ride the bus when we return, while Segun will pluck goats we encounter along the way. Sometimes I park the vehicle and also go with him to chase the goats.

How did you manage to do this without getting people’s attention?

We usually performed the act very early in the morning. We usually left Osogbo between 4:30 AM and 5:00 AM. We were always looking for goats sleeping on or by the road and plucking them as we drove on. We stole some goats along the Osogbo-Ibadan Expressway; we stole some from the communities after the city of Gbongan. We stole them from several places along that route.

Was this something you did regularly?

Can you remember the number of times you stole goats like that?

So, how many goats did you steal in total during the three operations?

We stole 15 goats the first time, 10 the second time and 18 the third time we were caught.

How did you get caught?

We were caught by Amotekun in Ibadan, Oyo State and they handed us over to Osun Amotekun. They were just suspicious of us when they saw our vehicle. There were two of us in the vehicle and we had about 18 goats with us.

What did you do with them when you stole those goats?

We usually gave the animals to Segun’s older sister in Lagos, who would sell them and give us our own share of the proceeds.

How much have you earned so far selling those goats?

I don’t know the actual amount because I didn’t follow Segun’s sister to where the animals were sold in Lagos. It was after the sale that Segun would send me my own share of the money. The first time the goats were sold, I got N50,000. I used the money to buy food and other things for my family. I am married and have two children. Times are hard. Because of the rainy season I don’t get boreholes and we have to survive. I regret stealing. I feel like killing myself. Stealing goats wasn’t my idea. I just got co-opted into it.