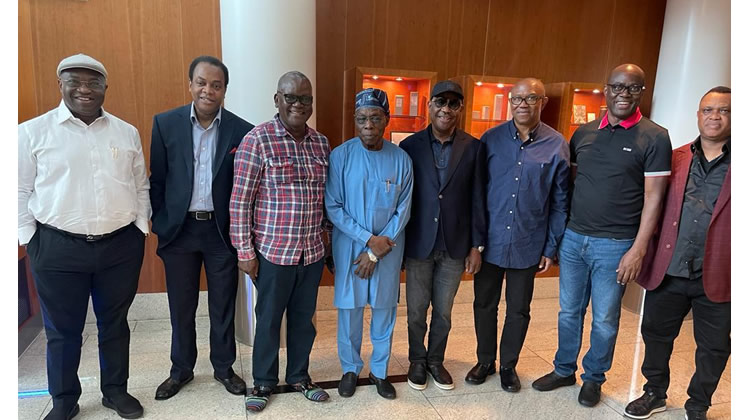 Rivers governor Nyesom Wike said Friday that the meetings his team held with former President Olusegun Obasanjo and some presidential candidates were in national interest and nothing personal as commonly believed.

The governor, who spoke to journalists at Port Harcourt International Airport on Friday on his return from the United Kingdom, was accompanied by Benue and Abia state governors Samuel Ortom and Okezie Ikpeazu.

The PUNCH reported on Friday that Wike met on Thursday with his party’s People’s Democratic Party presidential candidate Atiku Abubakar; and that of the Labor Party, Peter Obi.

The governor has been mortified since he lost the PDP presidential primary and after Atiku chose Delta State Governor Ifeanyi Okowa as his running mate.

He said that leadership should be about the collective interest and not about the selfish interest of people. He described as unfortunate situations where a governor serving eight years would want to be succeeded by his son.

“It’s only in this part of the world that you see that when we talk about poverty everywhere. These are people who don’t mean well with Nigeria,” he added.

He said that competence should be raised above ethnic and religious feelings.

He added: “The only identity they have in this country is religion and ethnicity, that’s all. It’s either I’m a Christian or I’m a Muslim. I’m a Fulani or I’m an Igbo. Nigeria cannot move forward unless they think they will. That’s where we are.

“We are in a country where someone with a primary school diploma can be appointed as Minister of Foreign Affairs. That tells you how bad this country has become. But with our consultation, this will all be a thing of the past. No form of intimidation or blackmail will deter us. We are determined to make it right.”

Ortom, the leader of the team, noted that they had met famous people in recent days because they believed that Nigeria was in distress and that concerted efforts were needed to save it.

“For us, we look at the bigger picture. Nigeria is in distress today. It’s about what we can do. We look at how we can leverage ideas and bundle ourselves together to make sure we get out of the current challenge we find ourselves in today.

He said that nothing concrete had been decided yet, but that there was consultation.

Ikpeazu also stressed that they were on a mission and determined to find a way to save Nigeria.

He added: “This is a country with great potential and we need to protect it. We believe we need to engage across the board. We are also looking at conversations with civil society organizations and people with ideas and with Nigerians in the diaspora .

Meanwhile, an ally of Wike and former Senator Olaka Wogu told one of our correspondents in a Thursday night interview that the meeting between Wike and Atiku’s camps in London was a continuation of the one in Port Harcourt.

“Wike made no demands, but there were things on the table. Wike is not eager to make demands, but he wants the party to be on good terms.”

Speaking about reports that Wike demanded that Atiku do one term, Wogu said: “No one was talking about a term or tenure for Atiku. There are some speculations that have not been discussed yet. But the fundamental ones are already for Atiku to deal with. “These are things that Atiku and Wike will resolve. Wike and Atiku are now taking control of the reconciliation process.”

He added that their current dialogue was based on the recommendations of the Ahmadu Fintiri-led commission.

When asked how long it would take for everyone to come together and work as a team, he said: “The important thing is that there is a direction where all parties are going. I think the hardest part has been tackled. The meetings are determined on the basis of the agenda of the persons concerned.”

A PDP head and former state minister for transport, Musa Azi, has said that while the disagreement has gone on for too long, it was not without a solution.

In an interview with one of our correspondents on Friday, he said: “All we need to solve the crisis is for the two camps to show understanding. They need to know that politics is a game of give and take.”

Asked about his opinion on Wike’s allies’ demand that Iyorchia Ayu should step down as the national chairman, Azi said: “All I can tell you is that we in PDP appreciate Wike for everything he has done for the party. But there can only be one candidate for the party. In any case, we will try to accommodate him and we will solve all problems. The issues will be resolved and that will in no way affect the party’s chances in the 2023 general election.”