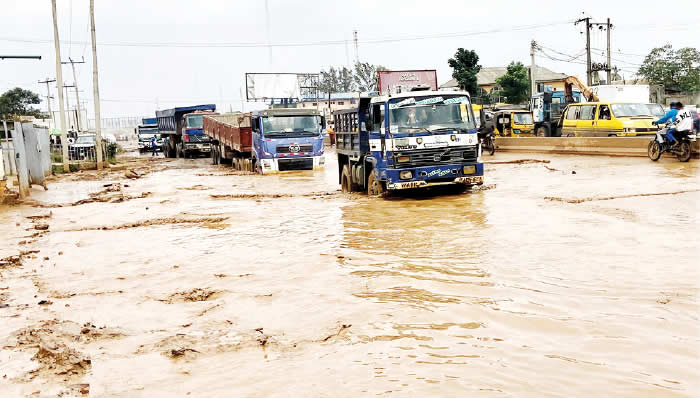 The Ogun State Government has begun rehabilitation of the Lagos-Abeokuta Expressway.

The PUNCH had reported on August 19, 2022 that the deplorable condition of the Sango-Ota end of the Lagos-Abeokuta Expressway continues to exacerbate the misery of residents and entrepreneurs in the area.

Our correspondent, who visited the area, found that the road had collapsed. Motorists and commuters had a hectic time on the route.

The nearly two-mile stretch from Joju, inward Ifo immediately after the Sango-Ota Bridge, was abandoned. The road was littered with large potholes of water.

Both trucks and vehicles were forced to switch lanes as they faced oncoming vehicles only to return to their lane at the Igbala end of the road.

But the state government said in a statement from its Works Commissioner, Ade Akinsanya, that the intervention countered the federal government’s failure to halt the deterioration of the road.

According to him, the rehabilitation work is divided into five segments. The first segment departs from the Tollgate end of the highway to Singer, a distance of 7.5 kilometers.

He said the second segment will cover Singer to Ifo, the third segment will depart from Ifo to Papalanto, the fourth segment will be from Papalanto to Itori, while the last segment will see the rehabilitation work start from Itori to the end of the road at the brewery.

Akinsanya, who led a team of journalists to visit some ongoing and completed road projects in the state, said the contract for the first segment of the toll gate to Singer has already been awarded and work is already underway.

The commissioner noted that the Tollgate to Singer section of the road is the most deplorable, noting that one side of the road is completely deserted and can only be driven on by heavy trucks.

“Another deplorable part of the road is between Papalanto and Itori,” he said.

Akinsanya noted that the state government could not wait for the federal government to repair the road because of its deplorable condition.

It is recalled that as a federal road, both the state governments of Ogun and Lagos approached the federal government to clear the road so that they could be repaired. But the request was rejected.

The team also inspected ongoing projects in the Ogun West Senatorial District, including Ilaro to Owode Yewa and the Atan-Lusada Agbara road.

The Atan-Lusada-Agbara road is 19 kilometers. It has a minimum of two lanes and in some areas up to eight lanes.

Akinsanya revealed that unlike the previous government, the current road construction in the state is carried out with the utmost cost-saving mechanisms.

He said the Atan-Lusada-Agbara road will have only one bridge, with a new two-lane bridge already under construction to complement the existing one and is about 70 percent complete.

“We are doing some rehabilitation on the old bridge by replacing old or damaged parapet and repairing some cracks with epoxy paint,” he explained.

Akinsanya said the Atan-Lusada-Agbara road is the largest project currently underway in the state, given the huge costs involved.

He reiterated the state government’s determination to deliver quality projects that will stand the test of time.