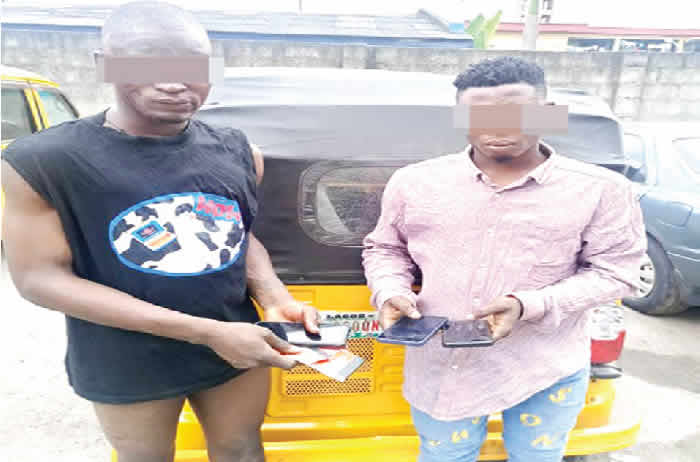 The Lagos State Police Command has confirmed the arrest of two members of a one-chance gang notorious for their activities along the Funsho Williams Avenue area of ​​the state.

State Police Public Relations Officer SP Benjamin Hundeyin said in a statement Wednesday that the suspects, Usman Hussani and Ebuka Ukechukwu, had been arrested following an emergency call from a victim who took his phone and other valuables.

He said: “Surulere Division police officers have arrested two members of a one-chance gang notorious for their activities along Funsho Williams Avenue.

“The suspects, Usman Hussani, 21, and Ebuka Ukechukwu, 25, were arrested following an emergency call from a victim shortly after he took his phone and other valuables.

“Recovered from the suspects are two mobile phones, two SIM cards, a Sterling Bank ATM card, a UBA checkbook from Ugochukwu (other names not mentioned) and a brand new tricycle with license plate LSD 360 QN used by the gang.

“Suspects will be arraigned as soon as the investigation is complete.

“The State Police Commissioner, Abiodun Alabi, hereby encourages residents of the state to remain vigilant at all times, especially when boarding public vehicles.”