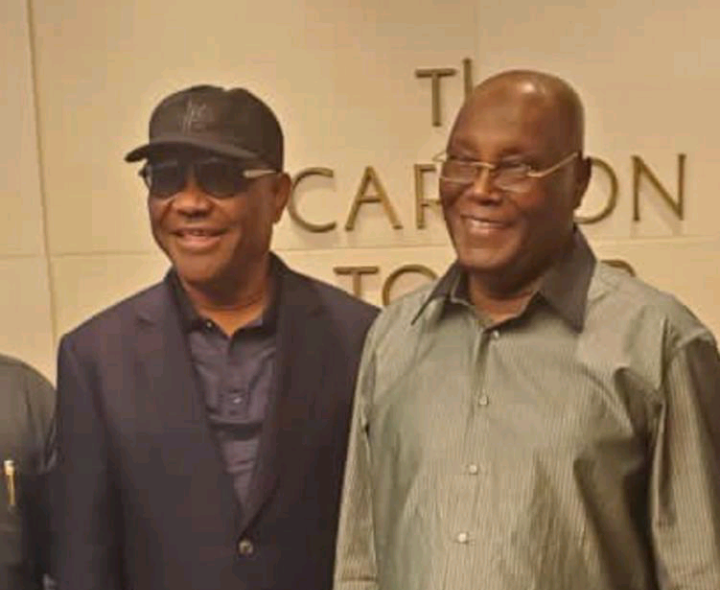 While some welcomed the meeting, others blamed the politicians for meeting outside the country.

A former presidential aide, Reno Omokri, who welcomed the meeting, noted that the party was making the right move.

Omokri tweeted: “We are united! And Governor Wike is a beloved member of our party. Those who expect to see us splinter will wait until winter comes to Nigeria!”

Another tweep, @mizcarzola1, said: “I like what I see, but I’m still not convinced until Governor Wike himself says that he has reconciled with Atiku and has no more problems.

“We’ve had enough of photo ops. However, this is a good step in the right direction. PDP!!! Power to the people!!! We are moving.”

Beating the politicians ahead of the rally, @dennisdamennis6 tweeted: “London is now the meeting place of the vultures. Nigeria is no safer for them.”

Another tweep, @mrtee_0, said: “Meeting in London to discuss how to rule Nigeria. Are locations in Kaduna, Zamfara or Sambisa not okay?”

“The way these guys are reuniting at will will tell you that PDP and APC are the same and we need to wipe them out next year. GOD spare our lives,” said @bjo1477.

@dashingmadu said: “I love the way the 2023 election shakes people up. Never has it happened or we’ve never had the kind of pressure and tension before an election.”

The PUNCH had reported that the rift between Atiku and Wike started after the governor’s ambition to become the party’s vice presidential candidate for the 2023 general election failed after the emergence of Delta’s governor, Ifeanyi Okowa, as Atiku’s running mate.