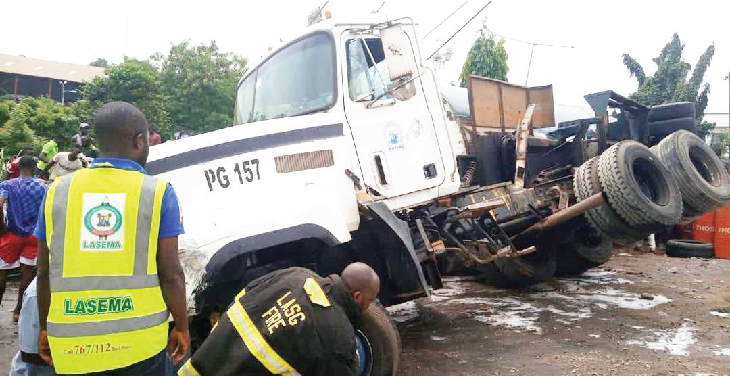 The President of the Maritime Road Transport Owners Association, Remy Ogungbemi, in an exclusive conversation with THE PUNCH in Lagos on Monday, admitted that there were some human factors responsible for the situation.

He also said the condition of most roads should be examined.

“All these things have to do with the environment. What I mean is, if you look at the road conditions, you know that most roads are impassable. There are also some human factors.”

He urged the government to investigate road conditions to help prevent some of these accidents. “If you look, for example, between Ijora and Constain, about three trucks fall there every day.

“The temporary measure they have recently taken has resulted in fewer trucks falling. And if you also look from TinCan port to Mike 2, there’s a section that has totally collapsed. “

The Lagos State Emergency Management Agency had said in a document this weekend that 340 accidents had been recorded among trucks and tankers between January and July 2022.

Ogungbemi further said that there was negligence on the part of truck drivers.

However, I am not saying this to defend the attitude of some of our drivers. There are human factors, but at the same time the road conditions are also factors for the accidents you see.”

The head of operations, the Nigerian Road Transport Owners Association, Stephen Okafor, also blamed some officers of the Lagos State Traffic Management Authority for fueling some of the accidents.

“Most of them are caused by officials of some government agencies. Most of those drivers start running at the sight of these cops and can get into accidents as a result. We’ve had cases like that too.”